It’s probably not much of a surprise to hear that most human beings are not entirely rational when it comes to making decisions – there’s just too many things getting in the way, such as emotions, other people’s opinions or convenience.

Even though we know what’s the right thing to do – exercise more, use less plastic, save for retirement, call Auntie Margaret – we turn a blind eye and do something that’s easier and more appealing right NOW.

So, if information and facts don’t have the desired impact, how can we help people make the right decisions?

Here are some clever campaigns from all over the world, that first looked at the specific behaviour that needed to change, and then found a clever way to do just that.

Imagine you’re a local council, and the streets are littered with cigarette butts, despite plenty of signs around to encourage smokers to put their stubs in the bin.

What if you make the act of ‘binning the butt’ more fun? 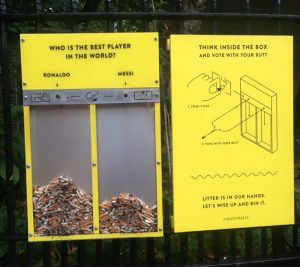 This was tried and tested across 30 councils in the UK, reducing cigarette litter by 46%.

That’s a fancy expression for males missing the mark at the urinal. At Amsterdam’s busy Schiphol International Airport, this was becoming a real issue.

So some clever people thought “let’s give them an actual mark to hit”, and painted flies on the inside of the urinal. 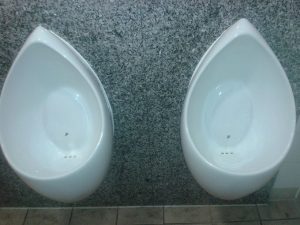 So simple, so effective – the initiative cleaned up (literally) with 80% less bathroom spillage.

Now, this next idea may be a bit more cost prohibitive, but how much fun it would be if stairs were actually pianos? Surely you’d play some tunes rather than standing on the boring escalators, right? 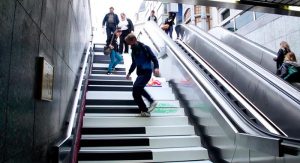 This awesome concept was implemented in Stockholm, resulting in a 66% increase in stair usage.

A Dutch company exporting bikes to the US had a big problem with many bikes arriving at their destination damaged. “Handle with care” instructions showed as little success as “Fragile” stickers.

So they changed their packaging to something that most people would automatically handle with care – a flatscreen TV. 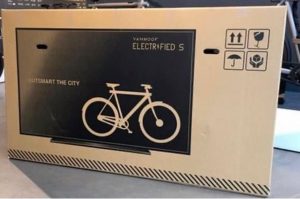 Looks like people care more about TVs than bikes – this simple change reduced the number of damaged deliveries by a whopping 80%.

So next time you put off that phone call to Auntie Margaret, maybe try to find a way to make it easier for yourself, or more fun!

The campaigns featured in this blog can be found here.

We trust our reputation with communikate et al.
They understand our philosophy of care and strategic direction and work with our executive team to navigate complex situations to provide responsive, robust internal and external communications advice that builds and protects our brand.
They are also adept at developing content and telling stories that bring to life our point of difference in the aged care sector. Not only are they skilled at what they do, they are great people to work with.

It has been excellent working with communikate. They have been very professional throughout our project and their creativity has delivered a unique product that captured our needs in an exciting and unexpected way. I look forward to working with them more in the future.